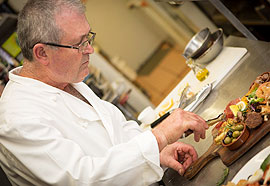 In 1981, Nino Cea opened Geppetto Trattoria with the vision to create an unpretentious eatery that focused on Italian home-style cooking. This idea was inspired by those eateries found in his hometown region of Puglia in Italy.

Nino has work in kitchens across the world since 1967. Moving to Melbourne in 1974 Nino worked as the chef/manager of the then famous Campari Bistro on Hardware Lane. Whilst working at Campari Bistro Nino also got experience as a waiter and pizza maker at Toto's Pizza on Lygon Street.

In 1979 Nino moved on to Degraves Pizza in Degraves Street Melbourne CBD where he honed his a la carte skills before opening Geppetto Trattoria in 1981.