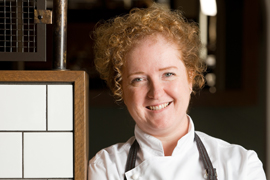 Nicky sought advice from the chefs around her and was soon attending culinary trade school and pushing through the ranks of an apprenticeship. Her first role, at Stephanie’s in Hawthorn under the guidance of Stephanie Alexander, progressed her career immensely. Nicky went on to open Richmond Hill Café and Larder with Stephanie as Head Chef. She went on to work at mecca, before opening Mecca Bah with Cath Claringbold, where she met friend and now business partner, Adam Cash.

Following the success of Mecca Bah, Nicky went on to be the only female head chef at Langton’s Restaurant. From there she was head-hunted for her role as executive chef at H- One in Hong Kong. Missing Australia, she moved back to Melbourne to take up the head chef role for the launch of CBD Italian diner Trunk and was most recently head chef of Karen Martini’s The Melbourne Wine Room.

Nicky’s skills in the kitchen and knowledge of produce come from over a decade of experience, but she credits her business success to the strong ethics instilled by her mother, Larke Riemer, Director Women’s Markets Westpac.

"I’ve worked with some strong women in my time including Stephanie Alexander and Karen Martini in my professional life, but it’s my Mother’s influence throughout the years that has given me the confidence to take risks and make daunting changes. My mother is a strong businesswoman and has provided me with amazing direction. Her support is hugely important to me and she’s someone I can count on for personal and business advice," says Nicky.

Nicky is now co-owner and chef of Union Dining restaurant, Richmond. Opening its doors in May 2011 to great success, Union Dining was listed as one of the hot new openings of the year in the 2012 Age Good Food Guide and saw Nicky as the only female nominated for Chef of the Year in the same acclaimed guide.