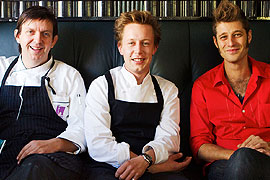 It was working with Andrew at Circa where Josh was introduced to an approach to cooking that is both restrained and considered and where the produce itself is championed.


In 2006 Josh became part of the opening team of the much-lauded Three, One, Two restaurant in Carlton where he worked his way to the position of Head Chef. It was amongst this highly energetic and tight kitchen team that Josh became entrenched in a culture of creativity and collaboration. In 2008 Josh was selected to head the kitchen team for the opening of McConnell’s hugely successful and frenetic-paced Cumulus Inc. in Flinders Lane.


Josh was recently awarded Young Chef of the Year by The Age Good Food Guide 2012; a major industry award that recognised his poise, professionalism and the commitment he has shown to his craft. This award has provided the opportunity for travel and further development of his knowledge and skills.


In April 2012 Josh joined forces with partners Anthony Hammond and Andrew McConnell to revive the Builders Arms Hotel on Gertrude Street, Fitzroy. The landmark public house offers a bar, bistro, garden and smart dining room Moon Under Water. Opening to early acclaim, the dining room was named hottest restaurant in Victoria by The Australian Hot 50 restaurant awards. Named after the George Orwell essay, Moon Under Water is a beautiful dining room for Josh and Andrew to present their acclaimed food.