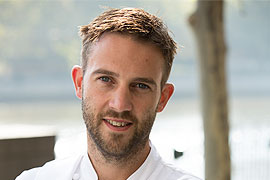 In May 2013, after extensive travel across Europe & South East Asia, Ashley returned home to take up the position of head chef at Melbourne’s Pure South Dining on the CBD banks of Melbourne’s Yarra River. 9 months later the kitchen is jumping and the influence of a young, fresh chef is making a big impact. Diners are seen returning to Pure South three and four nights in a row.


With much of his youth spent in the fertile wilderness of Gippsland Victoria, Ashley cooks with passion, simplicity and a love for premium produce from artisan producers. All his dishes tell a story, connected to memories of places and people.


Ashley believes that modern cuisine is about technique, diversity, collaboration and a sustainable approach to sourcing the best produce. Pure South is an extension of Ashley’s philosophy, the only mainland restaurant so devoted to bespoke Tasmanian produce. The owners & staff personally visit farms and fisheries across Tasmania, King Island and Flinders Island to source rare produce from remote suppliers, some so isolated Pure South is the only restaurant with which they have a relationship.


Previous to The Connaught, Ashley was at ‘Arbutus’, a cult favourite amongst Michelin star restaurants in London. Ashley holds a Masters in Culinary Arts (First Class) from the University of Brighton, UK. Completed in 2010.